So, let’s get right into it then.

As the name of the method implies, the ‘slice’ method is used to slice a portion of a string, to either extract it, or later remove it from the string.

Or I can use another pre-defined string method in JavaScript like maybe the ‘replace’ method to replace the extracted string with an empty string, and effectively remove it from the original string.

These are just some of the use cases of the slice method. As you start programming in real-world environments, you’ll come up with a lot more.

Now that we know how the string slice method works, let’s look at its syntax.

As you can see above, the slice method is preceded by the string’s variable name, which is ‘string’ in the above syntax. It also takes 2 arguments, the first one being the starting position and the second one being the ending position.

I’ll explain what the arguments entail in the next section.

Let’s take the below as our example string.

Now, let’s say I want to slice the first 4 characters, which amount to ‘This’ out of the string. I can obviously use the ‘slice’ method.

As you know, string indices start from 0, and go till string.length – 1, so I can give the starting position as 0 for my example, and the ending position as 4.

Why 4, and not 3? Well, the slice method only slices starting_pos to ending_pos – 1, which means it leaves out the character pertaining to the actual ending_pos index, so to include ‘s’, which is at the 3rd index in our string, we need to give the ending position as 4 and not 3, as shown in the image below: 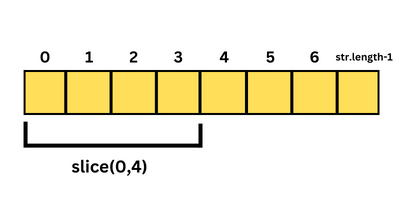 So, now that we know how everything works in theory, let’s look at the final code snippet to achieve our desired result:

The slice() method as such doesn’t affect the original string. The sliced section is a copy that can be reassigned to the original variable, or to a new variable, as shown below:

As you can see, the slice() method’s result was placed in slicedWord, and it didn’t affect ‘str’, the original string, at all.

The second argument is optional and leaving it out will extract the string from the starting position to the end of the string.

As you can see above, we’ve asked the slice() method to extract the string from the 4th position till the end of the string. Since spaces also take up an index in strings, the 4th position, which is occupied by the first space after ‘This’ will also be omitted and ‘is my string’ will be returned as the result.

No or invalid arguments to the string.slice() method

If you give no arguments with the slice() method, it’ll just extract the entire string by default, as seen below:

Also, if you give invalid arguments (NAN or undefined) as the first argument, and leave the second argument empty, you’ll get the entire string by default, just like the previous example.

As you can see, the result is the same for ‘undefined’:

In the example below, the first argument is a NaN value (a character), but the second argument is 4, so your browser will assume that you want to extract from 0 to 4-1 (3), which is ‘This’.

In the example below, the first argument is 5 (which means ‘This ‘ will be removed) and the second argument is undefined, so it’ll extract from the 5th position till the end of the string, which would be ‘is my string’.

Please note that the final example will not work when the second argument is a NaN value. In that case, it’ll extract nothing, and you’ll end up with an empty string, as shown below:

If the ending position (second argument) is lesser than the starting position (first argument), which wouldn’t make any logical sense for your browser, you’ll get back an empty string, as shown below:

On the other hand, if the ending position is greater than the string’s length, your browser will just extract until the end of the string and leave it at that.

As you can see above, the length of the string is 17, but we’ve asked the browser to slice the string from positions 5 to 20, where 20 is greater than the string length. It doesn’t matter though. Our browser still extracted only until the end of the string with no issues.

Alternatively, you can also give negative values as your first and/or second arguments. These values work a little differently than their positive counterparts though.

For instance, giving -1 as the first argument, while leaving the second argument empty, will extract the last character in the string, as shown below:

Now, this might be a little confusing, so let me explain things a bit. Just like how the positive indices of a string start from 0 and end at string.length-1, the negative indices start from -1, but the counting starts from the end of the string.

Look at the picture below: 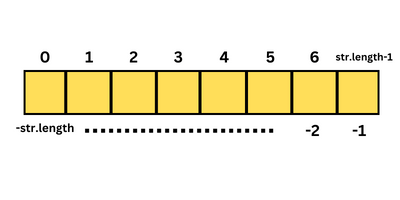 Also, you can slice from a positive starting position to a negative ending position. For instance, slicing from 5 to -1 will give us the substring at 5 to str.length – 2, as shown below:

As you can see above, at the starting position 3, we have the character ‘l’ (the second ‘l’ in Hello), and at the ending position -4, we have ‘e’, which is before ‘l’ in the string ‘Hello’. Now that doesn’t make any logical sense, so we’ve gotten back an empty string.

For example, in the example below, we’re trying to slice from the last character to the character at the 3rd index, which is just not possible, so we’ve ended up with an empty string.

You can give a negative value as your starting position (first argument) and nothing as your ending position (second argument), as shown below:

Also, you can use 2 negative values as arguments for your slice() method. Just make sure that the first argument has a bigger negative number than the second argument, so you slice something other than an empty string, as shown in the illustration below: 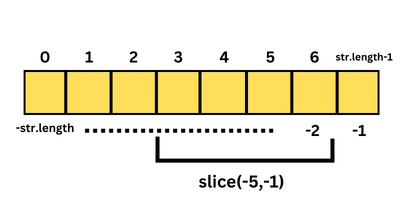 There you go! We’ve looked at the different ways of using the JavaScript string slice method to slice different pieces of a given string.